The Most Popular Methods Of Brewing Coffee 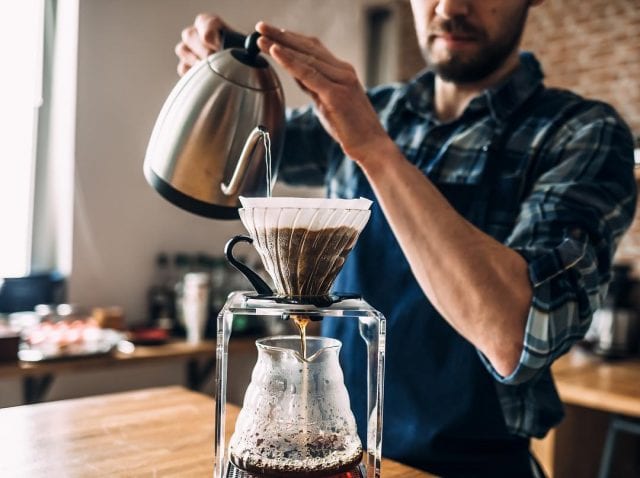 With the long and rich history of coffee, it makes sense that over the years, people would have found different methods of brewing the drink from the bean and into a drinkable liquid.

Various regions have their own, unique ways of making coffee, and many of those methods have found their way across the world.

Some of these methods can be done with a few simple tools, while others require expensive gadgets that often produce a much stronger, aromatic cup. Here we’ll explore some of the most common ways of making coffee.

The French Press method is one of the simpler ways of making coffee, which involves steeping and filtering it, and in many ways it’s quite similar to how tea is made.

Due to the steeping required, it can take a longer to brew the coffee than other methods, but it also means that the drinker will be able to enjoy a cup that has a much stronger flavour. 5 to 10 minutes are needed for the steeping, depending on the type of coffee used, and the grind is usually course, paired with extremely hot boiling water. It’s a great way of making it at home without investing in expensive equipment.

Coffee machines that are able to drip automatically have become extremely popular in households around the world due to how easy they are to use, as well as the large amounts of coffee that they can produce in a single setting.

A specific machine will be needed to make the coffee, and these kinds of machines are common to find in countries like the United States.

Much like steeping, it can take some time for the coffee to be ready to drink, somewhere between 5 and 10 minutes, along with hot, boiling water. This kind of preparation is great for those that prefer a consistent flavour for their coffee.

Pour over devices are numerous, but each one makes use of the same general principle to prepare the cup. A cylindrical filter will be filled with coffee grounds and will slowly drip the coffee down into the cup below. This is a favourite among coffee connoisseurs, as it allows them to control the flavour of the coffee.

It’s also a method that tends to be a lot faster than others, taking a maximum of around 3 minutes before the coffee is ready to drink. It’s a great way of experimenting with different types of coffee, as well as seeing what kind of flavour profiles can be achieved, and great for experimenting with during off days in combination with a new TVseries or playing online pokies NZ.

While not as popular as some other ways of making coffee, cold brew is nevertheless is a refreshing take on the beverage that’s perfect to drink when that extra kick of energy is needed but it’s a hot day.

It’s different from iced coffee in that it involves steeping coffee for longer periods of time to make a strong concentrate that’s both low in acidity and extremely smooth. Some cold brewers will let the coffee steep for as long as 24 hours in a single sitting before consuming.